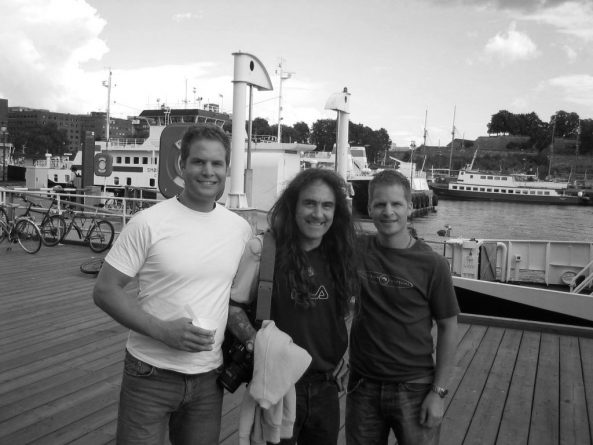 A few day after Roskilde, it was time for a new concert in Spectrum.
We met up in Oslo with my brother and Agnethe. We ate pizza before heading for a big Iron Maiden forspiel at Rockefeller Club. Normally a concert venue for mid sized bands; most bands playing Oslo. It`s only biggest who play Spectrum or Valle Hovin.Here we met up with Ragnar. Løken and leffis. There was quiz and ut was supposed to be a cover band, but it was cancelled in the last minute, until after the Maiden show.

We were seated at Spectrum. not the very best choice.. It was a strange night. The concert in Spectrum didn`t match the Roskilde show in any way. That show isn`t in my top 13 show.. It wasn`t the setlist or a bad performance. It was just a mixture of bad sound, seating and so on, or it could just be me. Well, every show can`t be that amazing.

We headed to bar, but soon back to bed at Oslo Plaza, were Maiden were supposed to stay.
We sat in the breakfast room when we spotted some of the crew, security boss Wally and more. Then suddenly Janick Gers was present. We asked for a photo and there was no problem at all. The crew were laughung at talking real loud. Later that day we spotted Janick several times in shops around Oslo.

Then at Aker Brygge, at the seafront in Oslo Harris himself walked just in front of us with his large camera and two other guys. I almost lost it and ran towards him and asked for a photo. Not a problem this time neither. His mate took the photo of my brother and I with Steve. Great!!

Two great days in Oslo.
Unfortainly we didn`t do the second night in Oslo this time, reports said it was a lot better than the first night…

no images were found