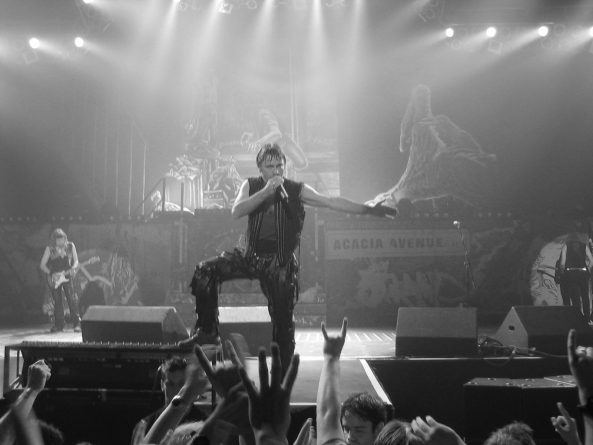 The next day I knew Maiden and crew was going to play fotball against a norwegian all star team. Someone from the norwegian West Ham fanclub told me the night before, but he said it was secret. I went to Valle Hovin by myself and with a camera without battery..

At the outdoors venue a lot of people had showed up for the match. It had apparently been in the newspapers. I met 2 guys from the Iceland trip a few weeks earliar, and he actually did lend me a battery for my camera. My day was saved!!

It was fun watching the game. Pels and a mate finally showed up. And I got a photo with Adrian Smith. I had never met him before. So the only Maiden member I still haven`t met, is Dave Murray.

Pål also came ( from Brumunddal) and drove us to Pels. A nice shower and then down to the city center to warm up for the second concert
We sat at the fantastic Stargate pub.(cheap beer..) Espen R and Espen S also showed up, even though they weren`t going to the concert. My brother also met up after arriving with the train.

The concert was actually the best concert I`ve seen with Maiden in Norway. It was many times better than the night before and the crowd was firing on all cylinders. Maiden enjoyed it very much and was very excited by the whole thing.

A great Iron Maiden midweek in Oslo. Thanks to Pels for the bed..