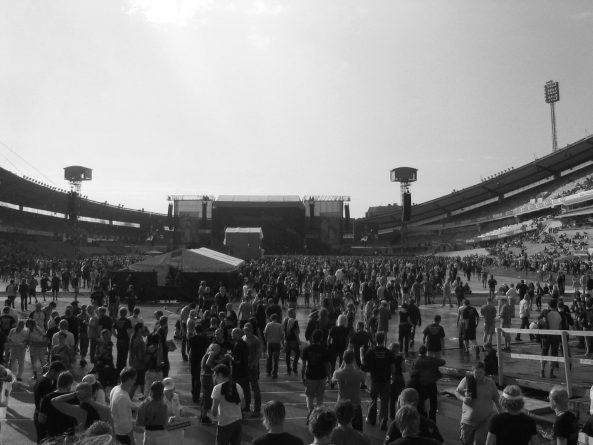 In June Pels, Daniel and Therese, Trond, Pål, Tone and me headed for Gothenburg. The aim of the trip was to see Iron Maiden play Ullevi in front of 57000 swedish maniacs.
Friday we drove to Oslo and met up with a hangover Pels( well just at the beginning) then we travelled by bus to Gothenburg.

We had hotel packages( real nice ones too..) at Gothia Towers including standing tickets to the concert.Gothenburg

We went out to check out the nightlife in the city center. Iron Maiden music was played at almost all pubs and bars. Not very common to say the least. A very enjoyable evening.

The concert day startet quite early with breakfast. Outside it was over 30 degrees, puuh..Some went shopping, Tone and me sat at a cafe trying to recover some fluid. Suddenly we saw Pels at a outdoors cafe at the opposite side of the main street. We crossed the road and saw Pels already having consumed a number of drinks.
We headed to the hotel to enjoy the dinner which also were included in the package. The restaurant was in the top floor with a beatiful view over Ullvi, and we could spot the quew. Pels drinking was restricted to beer by the waitresses, he he.

Back to the rooms to finish and the we took taxi to the stadium. Huuuuuuge.
We bought t-shirts(Therese that is ;)) and entered. Me a bit nervous due to my photocamera, but it was no checking what so ever.

It was a massive sight just inside to the sounds of Mastadon.
We relaxed in the middle of the stadium, drinking beer and explore the athmosphere. It was fantastic to be there.
The concert itself I have nothing much to say about, it was one of the 3 best Iron Maiden concerts I`ve been too. The surroundings and place was certainly the best so far. Only Roskilde and Iceland as competitors I think

Very tired after the concert we had planned a night on the town also this day, but ended up on McDonald…
The bus trip back was not that fun..But the weekend was top notch!!
Thanks for a great trip to the rest of the bunch.