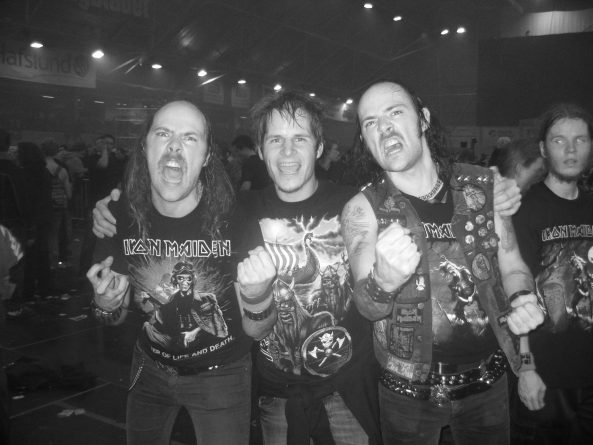 Monday afternoon we were ready again after the trip to Stockholm on saturday. Tun me and Daniel travelled by car to Oslo. We stayed at Trond`s flat. We started the day of the concert at Tronds flat. 3 pm we headed to the city centre and Elm Streer bar, which had a pre party. We had food and drink.

We met Elena again and we hired a taxi to the arena. We just made it in the nick of time. 5.30 we were let in by Dick Bell as we had First To The Barrier wristbands.

We got places to the left, just in front of Dave and Smith. In Stockholm we were at the right so this was perfect. We talked with some other fans at the at the front in the pit. Some of them were very young and short. I don`t think some of them get to see that much when the gig started. It was pretty ruff ar the front. But nothing like Spectrum 2005. The pits have really eased the pressure.

The concert was even better than in Globen and the audience was great, at least what I saw in the front.

Got a photo with Brødrarne Hardrock. Great guys.Then Rod Smallwood came wandering about. We also got photos with him. And Tun also got a kiss!!!
Outside it was mayhem. We had to go for a long time, but by luck we got a taxi and drove back to the flat. My klothes were soaked so I had a shower.
After that we tried to get ready for a party, but it ended up in nothing…