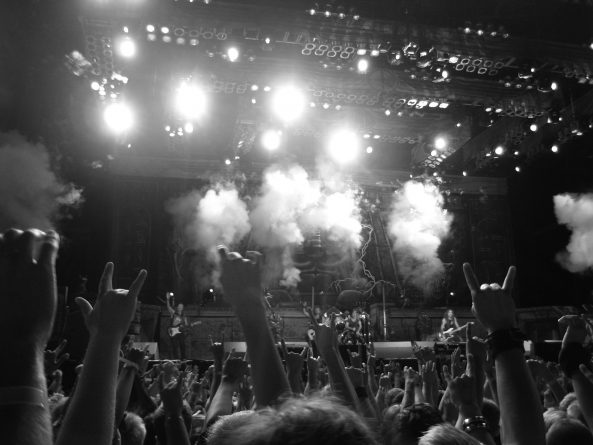 When I planned Stockholm I was a bit quick. I was going to Greek and was not going to land at Gardermoen before late night the day before. So there was no point of travelling home for the night and return to the airport in just some hours. I decided to stay the night at the airport. I got about 1-3 hours sleep on a bench. It was cold and constantly noisy. I decided to never to that again. Well the plane left Oslo in the morning and I got to the hotel in Stockholm about 12. I met Mortis and Ida. I was having a extra bed in their room. Thanks!!

We left for the city centre. I had to buy some shoes as I was still strolling the streets in my sandals I used in Keffalonia, Greece..I forgot my concert shoes in Greece.
We headed to the place where the meet up was. After that we walked to the stadium with Rafi from the board and the Viking.. he got us FTTB this time to. I always wanted to experience Maiden at Stockholm Stadium. The 2000 concert was supposedly very good. The stadium is old but stylish and easy to recognize. It holds about 32 000 and had sold out in hours.

The concert went on just fine and the Stockholm audience was up for it. Personally, it was a slightly let down after the Paris shows. It was the least exceptional show of the 6 I experienced on this tour.

After the gig we went to the same pub to drink beer and meet up. But it was over-crowded, mostly with wannabees..I had to collect my sandals in the bar, which the lady earliar in the day said was no problem. Well, there was a problem now as the stupied security wouldn`t let me in the collect them. After some explaining one of them went inside but came back insisting they did not have any shoes that belonged to me..I got quite angry and could not understand this attitude. We did get in after a while and I continued to ask for the shoes and almost got kicked out. Finally a chef !! delt with it and did actually find the shoes.

Well that was the end of that night. We left the place even though Maiden music was played.