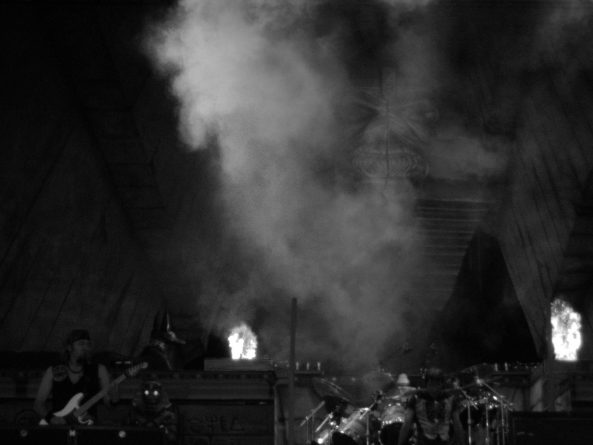 Early the day after the Trondheim show, I travelled south to my Brumunddal where I now live, and tsayed the night. The next day my brother and myselv drove to Oslo. We parked just ouside Valle Hovin.  We teamed up with Mortis and his friend and the chef!! and a girl. There was a football match just like in 2005. The Maiden team against a norwegian celebrity/musician team.

In goal for Norway was the old Tottenham goalkeeper Erik Thorstvedt. Stig Inge Bjørnebye, former Liverpool back, played for the Maiden team. It was very hot, about 30 degrees. I don`t remember the score, but I think they quit early because of the heat..

No photos with any band members this time as they disapeared to Valhall once the game was over. We got some photos with the old nationalteam players though. I was interviewed by NRK Sports on the way to the FTTB. Never saw anything of it. It was supposed to get aired or at least show up on internet. But I don`t know.
We headed over to the FTTB area. My brother and me got one each from two board members, Cyrus and one from Telemark, thanks a lot. The telemark guy joined us for the rest of the time before the show.
Once inside we had a lot of beer to make sure the body was full of fluids, it was hot. Every minute hoards of people, a lot of whom were teenagers, came running in and to the front. We stayed at the back until about 15 minutes before the show. I thought the special guests, Avenged Sevenfold was quite good. They even played the intro on Flash Of The Blade

It was time for Maiden.  We had decided to get to the very front this time, and we almost managed. 3 -4 rows before the barrier it stopped however. The pressure in front of the stage was real tensed this time. I never saw any official audience numbers. It was sold 25 000 before the concertday, so my guess is about 32 000. It seemed pretty much full, and I`ve been there with 40 000.  Anyway the show kicked off, and it was great right from the start. It was the first show on this tour so close to the stage, and you always get a kick out of that. It was a very sweaty 2 hours and the pressure from the crowd behind was constant throughout the concert. As always highlights were Powerslave and ROTAM. I rate this show as the third best of the 6 gigs I saw on Somewhere Back In time Tour. Bruce was in top shape vocalwise and showwise. He also made the effort to make the crowd cheer at a man working 80 m above the ground in a construction crane close to the stadium

After the gig we had to change clothes as they were soaked. We drove home with ears ringing, but very satisfied.
We said hello to Doug for the last time this time around. Never saw him in Belgrade seven months later.