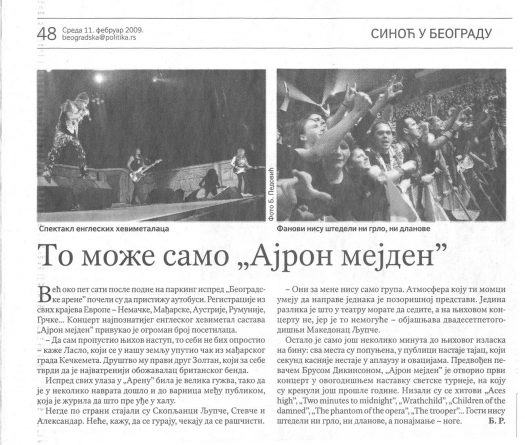 When news arrived on a fourth leg on Somewhere back In Time tour, I didn`t think of it at first. I thought 5 concerts was going to be it. Then I started asking friends, but nobody were interested in a Serbia trip. Then I decided going all by myself. I decided to just one night and stay at a hostel being midweek and all.

I arrived at Belgrade Airport 10 am the same day as the concert. I met some other norwegians who I shared a cab with to the city centre. The area along the motorway and towards Belgrade looked quite dull I have to say. The dull weather didn`t help neither. Well well I thought. This is also an experience. I went to the Happy Hostel and saw bombed buildings on the way, bombed by NATO the cab driver said..

I “checked in” to the hostel, about 12 euros for a night..
Then headed straight down to the Rebublic Square. I asked my way there and walked for about 15 minutes.  everything looked the same. Soon Maiden shirts were popping up from everywhere. I chatted to Rory and his irish friends. Also with some finns and swedes. We had a meetup photo and the square. Then some of us decided to go to pub and have food and beer. We were at a restaurant with irish, swedes and more. I had Gurlasj. Quite good in fact.

Then we headed to the arena which looked quite impresive. It was fairly new, built for the Melody Grand Prix. This time used for some very different music. We stood outside and chatted with people from all over the place. Macedonia, Serbia amongst others. Then we went inside, not  as strict guards as I was told and the camera ++ was with med inside. i bought the leg 4 tee and some beer.

It was great atmosphere in the arena and there`s not much too say about the concert really. Maybe a top 5 for me so far. This was one of the first times I`ve been to a tour/new leg concert, so I didn`t know what the setlist was going to be. Children of The Damned, Powerslave and ROTAM were the highlights.

After the show I went back to Happy Hostel in a taxi with the Irish. Me and one of the Irish went to a pub and had a few beer. Then we jogged back in the rain to sleep.

Up early and took a taxi with Charlotte from England and ? from Austria. Had a long trip back with a few hours in Dusseldorf. Chatted at the airport with a fellow norwegian. He was going to Mexico also…Maybe next time