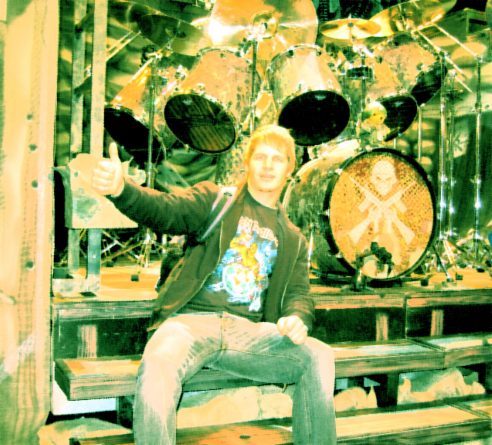 This is the story of Iron Maiden and me.It all began in 22 years ago back in 1988, 14 years old. At school we had this music competition. Everybody should play one favourite song each. One of the classmates played Can I Play With Madness and i thought it was a good song straight away. But he said wait until you hear the rest of the album, Seventh Son Of A Seventh Son. And he was right. It wasn`t until I heard the rest of the album and specially the title song that I really was hooked. This was exactly the music I had wanted.

Up til this point my music taste had been strange. At 10 I was a huge fan of Kiss, and after that it wasn`t a special band, just a lot of crap music i was listening to. It`s to emberrassing to mention here. I don`t know what I was thinking of at the time. But from 1988 and until today I`ve been a big big fan, and I am so happy to experienced and learnt what REAL music is all about.
My first Maiden item was the SSOASS on cassette. I thought the music was fantastic and very unique. The rythmic style, drum fills, cymbals and details of Nicko McBrain. The melodic, and trademark bass sound of Steve Harris. The heavy and still beatiful guitar parts from Adrian Smith and Dave Murray. And the extraorinary, operatic strong voice of with the huge range from Bruce Dickinson. This was a unbeatable combination of skill and passion. 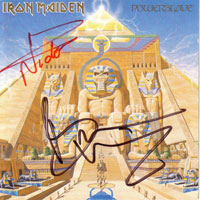 The next record I bought was Somewhere In Time. This one also was a great album. The cover was amazing. In my early maiden days, the mystery surrounding the band was enormous. And there was little info on the band in the ordinary press. I began to buy the expensive magazines Kerrang and Metal Hammer which often had covers and material on my new band. Gradually I discovered more about the band and the band members. At the same time I bought their older albums. I soon realised that Iron Maiden was a very special band. It was not just the fantastic and complex music but everything that surrounded the band to the great album covers.

The next albums I did buy was Powerslave, Live After Death, The Number Of The Beast , Piece Of Mind. I realised I had missed out on a great piece of music history. To this very day, I still remember when I was in the record store with the Powerslave cassette in my hands studying the cover. That was the best record and the greatest cover I`d seen in all my life. This was the first Maiden cassette I`d bought from the record store. The other ones I`d bought second hand from people at school.
Later I saw the video Live After Death which was pure magic. It was so good. We  actually went to a mates house in the spare time at school at watched the video.

It was 2 years from my Maiden days began until the next album was released, No Prayer For The Dying. At this point I had heard most of previous albums and other stuff. I also had 4 cassette singles. At the first couple of listenings I was a little dissapointed of the new album. My guitar hero in the band Adrian Smith had just quit, and you could tell. But I still liked it and was a big, big fan. In 1992 the album Fear Of The Dark came. I thought this was a lot better and it was my first Iron Maiden CD. This year was the year of my first ever Iron Maiden concert. My brother and I went to Spectrum, Oslo late summer 1992. It was a great moment. The concert was great and I was standing right in front of the stage. This was my first ever real Maiden experience.
It was to 7 long years to my next Maiden concert.

The next years to come 94-99 was not going to be the greatest  in the history of Iron Maiden. After the Word Tour Bruce Dickinson said he was leaving the band. It was a big shock and a great disaster. I thought that the band could not continue without their great lead vocalist. But they did. A new singer came along, Blaze Bayley. He did the vovals on the two next studio albums. The X-Factor I thought was OK. Some great music as always, but I could not handle the new vocals and I thought Maiden had lost some of their magic. The same with the other album with Blaze, but this one was the low point in Maidens career. This could not go on.

in the same period, Bruce Dickinson had been making a few real good solo albums from 1991. But it was his solo albums with Adrian Smith Accident Of Birth and The Chemical Wedding that were the great releases for me. I loved these two albums almost as much as some Iron Maiden albums. I got to hear my vocal idol even though he was no longer in Iron Maiden.

When Dickinson left Maiden some of the members was saying a lot of bad things about him and Vica Versa. So it came as a HUGE newsflash in 1999 when ironmaiden.com announced the return of Adrian Smith AND Bruce Dickinson. This was the best news there could possibly be. It was announced a reunion tour. Me and 3 mates ordered tickets to Globen, Stockholm. It was a 12 hours train journey away. It was fantastic to see Adrian, Bruce with the other guys in a full packed Globen Arena.

The next year Brave New World was realesed. The new six piece delivered the goods and it was like hearing them from the golden age. I was a the concert in Oslo summer 2000. The day before the concert I met guitarist Janick Gers in a bar.
Later they released the DVD Rock In Rio, recorded in front of 250 000 crazy brazilians. This is a superb product and shows what Maiden is all about; good music, great skills, showmanship, Bruce as the great singer and leader, the joy of playing to the best and most loyal fans in the entire world.

Their latest album Dance Of Death, released last year, was in my opinion, not as good as Brave New World. But it`s great album with future classics like Paschendale and Face In The Sand. This was also my great year of Maiden experiences. I attented 4 concerts. First at the Roskilde Festival where I saw Maiden with 60 000 othe people. It was great. Then in Oslo. This was the first time my girlfriend got to see the band I`d been listening and talked about for years. Today she is quite a Maiden fan herself. At the breakfast at the hotel I met Gers once again!! I also said hello to Wally! And later that day I met my big idol Steve Harris at Aker Brygge, Oslo…

In december both of us went to England to see Maiden as a part of the new world tour, in Earls Court (20 000) and in Birmingham ( 15 000).  In Birmingham I met Gers for the third time at The Bulls Ring Shopping Arcade. These two concerts, Globen and Roskilde and the meetings with the band members were my highlights of my years of being a Maiden fan
It has been some great years .

Iron Maiden is and will always be the best band in the world.

2005 was a great year.  I could hear many of the old classics for the very first time in Reyjkavik, Gothenburg and Oslo. It was also the year for my first Bruce Air, Flight 666. I also got to meet Bruce Dickinson at entrance of Blue Lagoon on the same trip. Great.
2006 saw another great album coming through and more concerts.
In 2007 I saw Maiden in Italy for the first time, at Olimoico stadion. 2008 was maybe the best so far concertwise. The return of  the mighty World Slavery Tour concept. The second night in Paris ranks as my best concert experience ever. It was magic and Bercy was on fire. In 2009 I did a trip to Belgrade on my own.

While writing this I`ve just been in Dublin at a show. One of the best so far.  How long can this last??