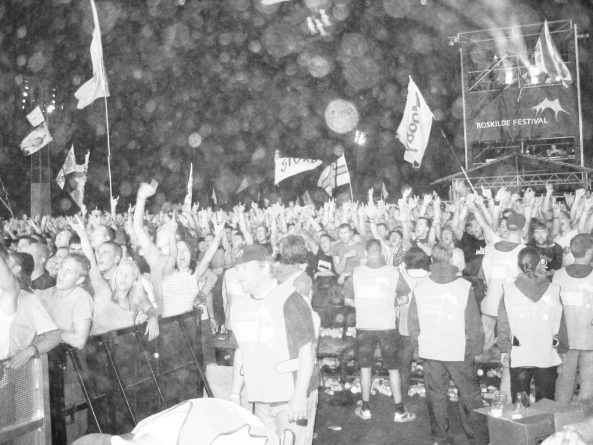 “Iron Maiden first band to be confirmed headlining act at Roskilde 2003”, that was what I could read january 2003. There was no doubt..I had to go

Tuesday night a bunch of mates met up for the ferry from Oslo to Copenhagen.
Pels, Kina, Frode, Risvik, Beinet, Soe, Tørrfisken, Stuen and me.
Our goal was Roskilde festival 2003. My first festival, but some of the othres had been there before. The party started that night and went on to the next monday really. Nothing I would want to do again really.

We stayed at a motel in a nearby small town to the festival site, Viby for fanden. Just a short taxi drive away. Perfect in our minds, but maybe not that festivalish..
Thurday we enjoyed ourselves in Viby, drinking beer and playing fotball. In the evening we hired our standard taxi and driver for the rest of the stay. The campsite was already full of party`s.

Anyway, the headline act for thursday was Metallica. My first Metallica show and it was great. It got top critics. We were far back in the crowd and didn`t really see that much, except for the big screens. Great night, and I wondered if Maiden could top this performance.

The next day was friday and Maiden day. We showed up early, around mid day, and some of us decided to go for the pits at the front. We managed to get in the third pit ( one pit between us and the stage, there were four pits due to the tragegy at Pearl Jam). W stood there all day in the sun and hot weather. But we`re allowed to step out for drink and personal needs. Besides the danes are not that strict about taking certain fluids in as the norwegians are..

There were a few warm up bands, can`t remember, one was Los Lobos I think.
The show was approaching and the atmosphare was great. A sea of people were behind us, about 60 000. Flags and chants all the way.

Doctor, doctor came on ehoed by a roar of singing and clapping. It was light outside and the guys just walked in and started The Number Of The Beast after the spoken intro. I was very emotional after witing for this moment for months and the start of that track was immense.

The sound wasn`t great in the 2-3 first tracks after that it was perfect. The concert went on to be in my top three, at least back then. It`s really difficult to range, so I`d better not. Some favourites were Revelation, Fear Of The Dark, The Clansman and believe it or not Bring Your Daughter, because of the intro and Bruce`s singing with the audience answering. And one of his longest notes ever. 40 seconds, I`ve clocked it. 😉

Also the crowd at Roskilde atmosphare did this concert unforgettable. I`m sure the few non fans festival audience were fans after this. The concert also got top critics, and Stein Østbø in VG ( norwegian paper) wrote “believe it not, Maiden played Metallica off the stage.

The rest of the festavil was off course for me a let down. I had seen the to bands I wanted. Coldplay played actually after Maiden that night, They weren`t that bad, but that music after Maiden wasn`t such a good idea. People seemed knackered and just lay on the grass. It was a strange mood going on.

I saw a few other bands too, Blur ( not good at all), Fu Manchu, Los Lobos, Coldplay, Massive Attack ( great), Turboneger (disappointing), Mew, Immortal, QOASA, and Bjork who was closing the festival.

It was a great trip.