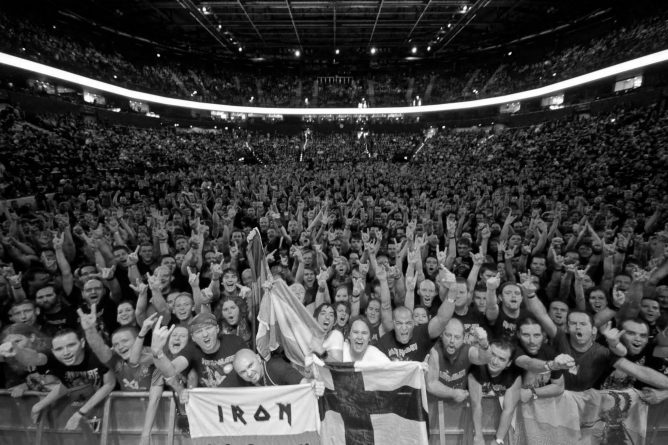 This being my first concert on the Maiden England Tour, I had high expectation. The tour does also feature some of my favorite Maiden tracks from the album Seventh Son Of A Seventh Son.
I was joined on the trip by mate Jørn- thanks for being a great travelling mate!!
We arrived in Hamburg at noon ant it was HOT. About 35 degrees. We had a few cold beers before checking into the Renaissance hotel in Neustad. Nice hotel.
Before we were going to Hard Rock Cafe at the harbour for a preparty we met to englishmen, father and son, from Yorkshire. They joined us on the way and we had a great time right up to the concert. Burgers and beer on the roof of the Hard Rock Cafe building. We had fun and talked about meeting later in Norway next time?
We arrived at the O2 World Arena about 7.30 PM. It was a great atmosphare in the area.

After the intro tapes and some goosebumps..the show kicked off with Moonchild. The sound was a bit poor in the start. But like in all Maiden shows it always get better and so it was here too. The crowd, 12 000 and sold out, was great and added to the experience. We had a lot of fun in the first row in the seated area to the right from the stage. It was like being in the standing area but also being a half meter above the rest at the floor..
Highlight for med was, Afraid To Shoot Strangers, Seventh Son, Phantom Of The Opera, The Prisoner and Aces High. The crowd also was on fire during crowd pleasers such as The Trooper, Wasted Years and Run To The Hills. Adrians new take on the guitarsolos in Wasted Years and The Prisoner is really great. I miss Infinite Dreams though in the setlist. I guess I`ll never get to see this track live..

The next day we visited a biergarten and the St. Pauli area. We had Schwein Knuckle a bit too late in the evening.. Reperbahn is a bit hyped and overrated, isn`t it..Overall Hamburg was a very nice city, and would love to go back next time!
[nggallery id=65]