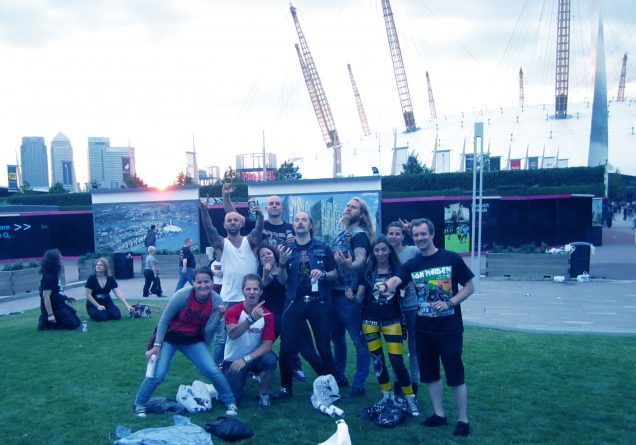 After two great shows in Oslo and Helsinki, I was really looking forward to the two shows in London. Saturday being the last show on the tour and the last planned show so far. When will be the next time no one knows..

First off – by coincidence – we landed next to Ed Force One at Gatwick – which I was sure had been repainted! It wasn`t. Fisrst time I had seen this tour plane.

We arrived thursday having no special plans that day. For non-Maiden related photos go here.
We had a great warm up night in Fino restaurante in Soho ( finalist in Gordon Ramsey show!?) , then lagers and white wine in Covent Garden and finally Camden Town.

After another trip to Camden early on friday we prepared for Maiden. We used the tube to Greenwich where the amazing London O2 Arena was located. I have never seen anything like it really. Great place, the arena itself, cinemas, childrens stuff, bars and restaurantes everywhere. We looked around and bought something to eat and drink in Tesco and headed for a grass pitch. I met Torgrim Øyre and had a chat with him. One of the famous “Brødrarne Hardrock” was also present. We took a few photos with the arena and Docklands area in the backgound.

The first night we were seated. Great seats though. And as the show started everone was on their feets anyway. Standing with great view is what it was!!! And room enough to play the airguitars.. The show was one of the best I`ve seen. I have problems with rating the shows these days. All are great. Again The Talisman and Coming Home were my faves. The apparition of the Eddie from behind the stage was also spectacular. I haven`t seen it so clear so far. He was massive with those fingers coming out first. Bruce repeated his tale about the norwegian mass murder and the rest about how Maiden`s house was open for all religions. Great show in Maiden home town.

After the show we were exhausted, but a burger got us going and I and Mortis had a few pints and a metal bar.