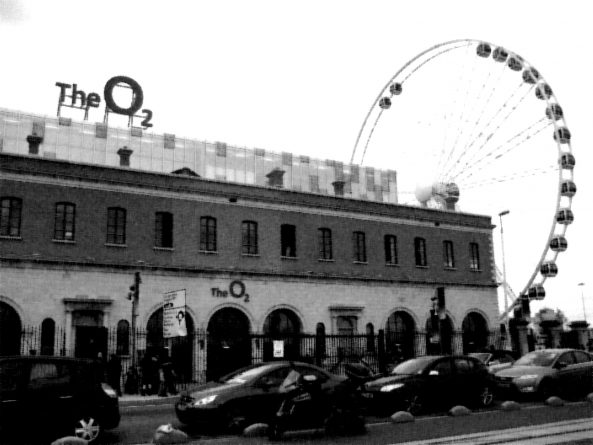 We arrived in Dublin on thursday. Both of us had visited Dublin before so we new what to expect. I wanted to visit the Guinness Storehouse once more and did so. We had three great days in Dublin, it`s a vibrant city with soul and we`ll visit again for sure. For us it`s better than Rome, Paris, Berlin, Copenhagen, Stockholm, Helsinki,Oslo and maybe London. I`ll add a few photos from the rest of the trip later.

Friday was the we`d waited for. Having read all the great reviews from North America, I had great expectations. About 4 pm we headed east down the streets towards the docklands. Having planned nothing this time, meet ups and so on, we entered a hotel near the arena, full of Maiden fans and a Maiden menu.. I had a few drinks there and chatted with with a scotsman who I`d met before.

Then we headed to the arena. The O2 Arena ( former The Point) was an impressive sight, old and new blended in style, this is also typical for other bulidings in Dublin. It had the best facilities I`ve seen so far in a concert venue. Beer and stronger stuff all over the place and toilets to match a opera.. We were going to see the show seated this time, and the seats in block E, row 27, were perfect. I actually got the standing tickets i bought initially swopped into seated. Great service from ticketmaste.ie.  Almost right in the middle. It seemed sold out, 12 -13 000.

We got seated quite late and after some Maiden chanting from the floor, Docor Doctor was played through the speakers. Then the great space inspired intro started. Yes, it was to happen again. Adrian entered and played the Wickerman riff to an exploding crowd. After the opening crowd noise had calmed a bit, I did notice some sound issues. And these problems continued for 4 tracks. Nothing much, but enough to stop the, at least the seated crowd, from explode. I guess these things are easiar to spot when you are seated, you see and hear everything. At the floor all sorts of things were going on. It seemed pretty tough, large groups of people falling over and even some mosh-pits..During Dance Of Death the sound got sorted, the distorted bass sounds disappeared and Bruce was clear and the guitars defined. Actually from The Reincarnation Of Ben Breeg, I think I`ve never experinced such loud and clear sound. It isn`t a real maiden show before the Nickos drums is clear and loud. The rest of the concert was really, really great, one of my best, and the audience was into it. The highlights of the concert for me were Blood Brothers ( the track was dedicated to R.J.Dio and I dedicated it to another person.), No More Lies ( not my fave, but this time it ruled) and Running Free. Dave Murray was on fire this night and was soloing right in the front in the middle of the stage. We also had our eyes on Steve and Bruce, 53 and 55 year olds?? On the final track Running Free the band was served Guinness on stage while playing. Great.

Thanks Ireland and Maiden for a great trip and concert.
Looking forward to Bergen, although I doubt a outdoor show can top this..We`ll see- maybe 22000 fans from Bergen will rock !!??

14.The Number of the Beast
15.Hallowed Be Thy Name
16.Running Free